The supreme purpose of history is a better world.

The burnished wood display case caught the eye of the 80-year-old former nurse. Faded black and white photographs of her 1945 graduating class were accompanied under the glass by a 40th anniversary plaque. Both items rested softly on a worn blue-grey nursing uniform. The uniform sparked fond memories. The photographs brought them flooding back. A week later, she made $2.5 million gift to the hospital.

History can be a powerful emotional trigger. It can also be a potent marketing tool for non-profit organizations and charities.

History can provide credibility and make an organization worthy of support in the eyes of a donor. It can provide stability during difficult periods that might involve budget cuts or name changes. It can give donors a sense of accomplishment and a feeling of belonging to a special group. It can also be used to stimulate giving from one generation to the next. The value of longevity and a successful record of accomplishments should not be underestimated when it comes to attracting donors and grant makers.

Anniversary events present a perfect opportunity to celebrate past accomplishments and to say thank you to major and long-term donors while they are in the company of peers, friends and family members. They are also an opportunity to introduce new giving programs and to initiate expanded media coverage. Uniquely crafted human interest stories are always in demand, and blending the history of your organization with interesting quotes or life stories from long-term and/or major donors can result in excellent feel-good coverage for your organization.

"We are making good use of our anniversary to increase media coverage," said Spleth. "We will introduce some fundraising events (which we have never done before) and introduce gift club levels to our development program. The anniversary year has given us an excuse to do several things we've wanted to do for some time. We can articulate our history and trace how our work has changed over the years based on the changing needs of the community, etc. It just increases opportunities to tell our story and (we hope) increase our donor base."

"The increased focus on what we'd accomplished together over our 20 years really invigorated board and staff alike to become much more active in development activities," said Chris Breva-Erickson. "This ensured that we would be able to continue our work for the next 20 plus years - much more so than I'd expected. That alone made it well worth the time and energy we invested in the reception."

"This wouldn't always apply, but in our case, the anniversary and reflection on our history and accomplishments was also a helpful counterpoint to a very discouraging year we had experienced in our public policy efforts."

NatureServe, a non-profit conservation organization that provides the scientific information and tools needed to help guide effective conservation action, used the power of accomplishments over time to create credibility when going through a difficult name change period.

"We recently launched an endowment campaign," said NatureServe spokesperson Christine Iffrig. "And though we have a 30-year history of conservation accomplishments, we have only been an independent organization for about five years (previously part of another non-profit)."

In our case statement, we highlighted our accomplishments (using a timeline with examples) across our 30 years in order to "prove" that we are an established group worthy of significant donor support."

Marian Matthews, Director of Development PB&J Family Services, Inc., also has experience in dealing with a name change. PB&J Family Services celebrated their organization's 30th anniversary two years ago with a number of events. They needed something that would portray their long history of accomplishments.

"In order to both keep the information about our longevity alive (and help with the name change transition) we had a graphic artist develop a special logo for us which we now use on publications, stationary, etc, " said Matthews. "It's a small little block (1" x 1") that says 'Peanut Butter & Jelly * Celebrating 32 Years.' I just change the number of years every 12 months."

Upper Hudson Planned Parenthood in Albany, New York, also used their anniversary to modify their logo, and combined the creation with a number of events and promotions.

"We celebrated our 70th Anniversary in 2004," said Stephanie Mack. "A media subcommittee of the larger, volunteer-based 70th Anniversary Committee worked with our Vice President of Public Affairs and Marketing and our P.R. agency to develop a year long PR and Advertising campaign."

"To engage our clients, board, staff, donors, volunteers and general public, we did the following: a billboard on our busiest highway (as well as billboards on heavily traveled routes in our other service areas - 3 other counties), a banner across one of downtown's main intersections, strategically placed feature articles on the different facets of our programs and services, radio and television promotional spots, PSAs, and a two-page signature ad in the Sunday paper."

"In addition to our Annual Event, other smaller, county-based events, and 'Burma-Shaves,' we hosted a Board Alumni Luncheon. It was a busy, successful, and obviously commemorative year."

"I am now involved in a $42 Million capital campaign where the theme is "Celebrating our Past: Building our Future", said Norman Olshansky of NFP Consulting Resources. "The organization has a proud history and the current leadership is made up of children and grandchildren of founders and major donors from the past."

The campaign is giving a major focus to history and inter-generational leadership as a way of continuing the traditions of support. The marketing material, composition of committees, and fundraising techniques, are all emphasizing inter-generational approaches with a tie into the history of the organization."

The Jewish Foundation of Manitoba implemented a comprehensive planned giving program that uses not only its own history of accomplishments, but also the history of its donors and their families to help market their Endowment Book of Life.

The accessibility of the donor stories in multiple locations including a physical display, a touch screen kiosk and on their Web site, has resulted in a very high profile for the Endowment Book of Life. Community members and potential new donors have numerous opportunities to read, relate and identify with the history of the organization and their peers, and are ultimately compelled to become "Signers" (members) themselves.

The marketing of the history of the community and its members has been so successful that there is now a waiting list to get into the program.

Sarah S. Brophy of bMuse, a freelance proposal writer for museums, also points out in her soon to be released book "Is Your Museum Grant Ready?: Assessing Your Organization's Potential for Funding", that aggregated history is as important as anniversary-triggered history.

"Your explanation of accumulated successes, or responses to challenges, or successful adaptations to situations beyond your control, can demonstrate your institution's strength and momentum," said Brophy. "When a foundation makes a three-year commitment to fund a staff member; the construction project finishes on time and within budget; and your house tour fundraiser has the largest attendance ever, you are gaining momentum."

Having forward energy that helps you address challenges and capitalize on opportunities is a sign of a winning organization that will attract donors. An anniversary isn't the only time to list accomplishments over the years - do it in each application, letter and conversation. And be sure to explain why your successes are the right successes for your organization."

Part of the multimedia presentation that appears on a 42-inch plasma display in a high traffic area of the Hospital, is a series of videos which includes historical footage of the hospital, as well as a number of short vignettes that showcase the hospital's history and its importance to the community. 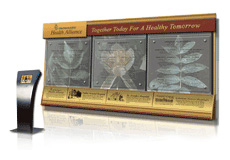 The Foundation of Chatham Kent Health Alliance, which was formed through the amalgamation of three separate hospital foundations, each with their own aggregated history, utilized each hospital's unique historical background to help donors feel connected to the new Foundation.

Two separate donor walls in different locations, one accompanied by an interactive kiosk and the other by an integrated touch-screen LCD display, use historical images and text from each of the three hospitals, in an effort to preserve the past while promoting the future of the Foundation.

Red River College is implementing a combination donor wall and touch-screen kiosk that features information regarding their rich history and their importance to the community, as well as a swipe card system for making credit card donations. Perhaps, more importantly, the interactive kiosk features a method for alumni to register electronically with the College.

A tour of many universities, colleges and schools reveals walls lined with large framed displays of graduating class photos. Imagine what would happen if you could connect the individuals in these photos with each other and then unite them in a common cause for the organization.

An interactive multimedia presentation that included not only organizational history and information about giving programs, but also archival material such as photo displays of individual graduates by class - and a method by which those alumni could contact each other through the organization - would attract an incredible amount of traffic The key would be taking that initial contact to the next level.

This type of interactive multimedia presentation, whether on a plasma display, touch screen kiosk or the organization's Web site, or a combination of all three, could help an organization reach a new level of giving in their alumni programs.

History evokes memories which can result in a stronger emotional attachment to your organization. People want to feel connected to other people with similar interests, morals, values, goals and backgrounds. They also want to belong to groups that give them a true feeling of satisfaction. There is nothing more satisfying than the feeling one gets from giving to a good cause, especially if that giving results in unsolicited recognition from peers.

Organizational history can be utilized in physical recognition exhibits, multimedia presentations on plasma displays and interactive kiosks, on Web sites, and in traditional media, to create credibility; establish longevity; promote accomplishments and their importance to the community; hold special events; announce new giving programs; stimulate inter-generational and multi-generational giving; connect and unite individuals in a common cause; and to highlight the importance of the past as it relates to the present - to create the future.

History is a proud catalyst. Use it to ignite your fundraising efforts.