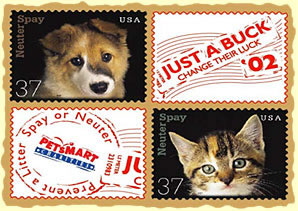 PETsMART Charities Director of Marketing and Development Shelley Center made a very important presentation to the United States Postal Service earlier this year. Her cat, Murphy Brown closed the deal.

The four Postal Service representatives from Washington D.C. included a licensing consultant - who stood to make a commission from any licensing agreements. But Center had a secret ally when she marched into the meeting - her cat, Murphy Brown.

Murphy is a 2-year-old brown tabby who loves people and who has attended over 100 hundred meetings with Center. He embodies the mission and goals of PETsMART Charities…to save the lives of animals from euthanasia simply because they have no homes.

Murphy had the misfortune of being born to a stray mom. He, his mom and his siblings, were all found during kitten season, when there was no space at the overcrowded animal shelters. His family was put on the euthanasia list and scheduled for a tragic end. Luckily, the family was saved by a local rescue group, and taken to a PETsMART in-store adoption center, with hopes that they would find a loving home. Murphy was adopted by Center and taken to work almost daily.

The Laws of Compensation were in full force at Center's meeting with the U.S. Postal Service, as Murphy's antics won the hearts of the group. After exploring the room and saying hello to everyone, he walked over to the licensing consultant and made himself comfortable. During the entire meeting, Murphy stayed with the licensing consultant, purring and looking him in the eye, as if to say, "If you do what my Mom wants, she'll help save more cute little guys like me."

The postal service consented to the use of their art for the PETsMART "Just A Buck, Change Their Luck" campaign - at no charge. The result - $2.3 million raised in three weeks.