As one of the premier experts on the subject of marketing to women and the top female copywriter in the information market, Lorrie has written two award-winning home study courses while also creating The She Factor Workshop and Marketing System. She teaches world-famous teleseminar trainings, holds live workshops on copywriting for the female market, and heads her own mentorship programs for copywriters and entrepreneurs. She is dedicated to teaching the world that it is possible to shift from hype-filled sales copy to a more modern version…copy written with authenticity, trust, and rapport - which also happens to be a perfect fit for the non-profit world.

Planned Legacy: Marketing to women has always been important but it seems to have become much more prominent in the last few years. What are the primary reasons for this?

Lorrie Morgan-Ferrero: Women have had a lot more power in the marketplace than I think even WE  (other women) realized. It really began in the 1940s when it was expected that women go to work for the first time while the men were at war. When the men came home, things were never quite the same. Some women continued to work. Others didn’t. But the door had been opened.

Over the next few decades, it was still a man’s world. If you watch the TV show Mad Men about men in advertising in the 1960s, you’ll get a good idea of what I mean. Women could make money, but weren’t valued as much as men. (By the way, the 1960s were also one of the heydays for creating a ton of the recycled marketing used today.)

From the 70s onwards, families became more and more dependent on a two-person income. Women were expected to work if they were married. And of course if they were single, they needed to work. So there’s your quick history lesson, but overall I have to say there were a few things that really brought their economic power to the forefront.

Another thing is that women have been influencing and even making big purchasing decisions for longer than many of us thought. Women tend to initiate larger purchases like cars and homes, then do a lot of behind-the-scenes research. When a realtor or car dealer is on the scene, it’s usually the man who appears in charge. In fact women often want it that way for fear of being taken advantage of in negotiations.

Now I’m using large brush strokes here by speaking in generalities, but overall that is what happens. And the purchase isn’t complete yet either, because it’s the female who will generally be dealing with follow up and customer service issues. If she’s happy, she’ll remain loyal to that company. Not only that but she’ll tell all her girlfriends about it (See YouTube video below for more on The Rave Factor). If she’s unhappy, she’s gone (and so are her future referrals.)

Planned Legacy: Why should non-profit organizations think seriously about creating additional marketing campaigns targeted towards women?  What are some of the benefits of doing this?

Lorrie Morgan-Ferrero: Non-profit organizations are a PERFECT match with women. Men’s and women’s values are different based on our biology. Women are hard-wired with more empathy, a sense of global community, and the desire to create better world for future generations. (Again, this isn’t to say that men don’t also value these things, yet to women they are critical.)  These qualities are perfect matches for most non-profits. My findings are that when you use the marketing campaign styles that work for women, they also appeal to men. But the reverse isn’t true. Using the traditional male marketing often repels women.

Planned Legacy: What are some of the basic differences to keep in mind when marketing to women as compared to marketing to men?

Lorrie Morgan-Ferrero: Women and men make decisions extremely differently when it comes to how to spend money, and not understanding those differences can result in a lot of lost donations. In order to drive this home, I have to give you a brief biology lesson.

Think back about a couple million years ago (give or take) when we as human beings were just emerging. Largely because of the drive to procreate and the differences in the male and female bodies, certain psychological protections had to emerge. Men, as the hunters and providers, are more single-focused in their actions. They zeroed in on what they wanted, got it, and moved on. Competition and winning are huge instincts in males. Women on the other hand are more multi-focused, scanning the environment for threats or berries to gather for the tribe. Creating community for support and protection was very important. Those drives continue to live on today and believe it or not show up when we look to separate from our money.

As marketers that means you’ll have a better chance of reaching men by pushing the ‘Be the Winner’ hot button. With women you want to look for ways that highlight community and giving back. That’s an oversimplification, but it’s just one way the genders approach the world differently. That’s just one of many other differences in our purchasing styles.

Planned Legacy: What are some of the mistakes to avoid when marketing to women?

Lorrie Morgan-Ferrero: There are actually quite a few, but I'll list three of the most common mistakes to avoid: 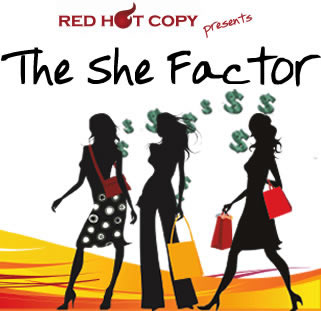 Planned Legacy: When trying to re-establish a relationship with lapsed female donors, can you suggest any techniques that might work better than others?

Lorrie Morgan-Ferrero: The fact that there are so many situations unique to each non-profit organization makes this a pretty tough question. Here are a couple I’ve seen work in the past:

But DO NOT make her feel guilty or wrong in any way for not continuing to donate. When you come from a place of gratitude and service, she’ll sense it and the odds are she’ll be writing checks to you again in no time.  (FYI, at “The She Factor” Workshop, we do have hands-on marketing creation specific to your business or organization's needs.)

Planned Legacy: Could non-profit organizations benefit from establishing a presence on certain types of social media Web sites with regards to attracting more women to their organizations?

Lorrie Morgan-Ferrero: When someone wants to know more about your organization today what is the first thing they do? Either they put your company name in a Google search or they look for it at one of the social media sites. It would be a huge error to NOT create a social media presence online…and it’s very easy to do.

Right now you get the most bang for your buck (even though they’re free) by using Facebook, Twitter and/or any blog. The reason I suggest those three in particular is because they all integrate together.

In other words, when you write a blog post, it comes up on your blog, but also (when you set it up correctly) shows up on your Facebook news feed. Twitter, which is a micro-blog limited to 140 characters, also shows up on Facebook. Social media keeps you in front of people without pressuring them to take any sort of action. Women in particular are perfect candidates for social media because of their natural need to connect and share.

Planned Legacy: What influenced you to create The She Factor Workshop?

Lorrie Morgan-Ferrero:To be honest it wasn’t something I really wanted to do. I was definitely apprehensive about it because my industry (copywriting and marketing – can’t have one without the other) has been built on a more traditional, male-oriented style. I was taught by some amazing men and I learned to market and write in a highly testosteronal way. I felt that if I stood up and said, ‘Hey, women want to be communicated with differently!’ that I’d get eye-rolling and branded an amateur.

It wasn’t just that my instincts told me they wouldn’t agree with me by the way. Whenever I would share privately that my female followers were allergic to the hype (and a lot of other traditional marketing techniques), I was told to ignore them because they wouldn’t buy anyway.

Finally at my first live event I saw these women face-to-face and really connected with their pain. They wanted to market effectively to other women because they wanted to make money in their businesses. But they just couldn’t get their heads around why the copy had to sound so harsh and not in their own authentic voices. The men at the event who wanted to reach women recognized their marketing wasn’t working either. Yet nobody was acknowledging there could be a change in the way things have been done in marketing and copywriting for the past 100 or so years.

Iin marketing it’s accepted to model or swipe from marketing that’s been successful in the past. That past goes all the way back to the early 1900s when women didn’t even work. They had little say about how the money was spent except maybe on food and small household items. So in the past marketing was aimed at men (as it should have been.)

Today women make 85% of all purchases across every brand so it makes sense to update the recycled marketing material we’ve been using. And they are buying everything from 92% of homes, 70% of electronics, and 65% of cars. The more I read about the statistics and how women make buying decisions very differently, the more I realized someone was going to have to find the solution. So I researched, implemented, and tested new marketing methods…and they worked. I put them together in *The She Factor.*

I’m also writing a book, holding a free educational teleseminar series, and of course the live She Factor workshop on November 10-12 in Los Angeles. 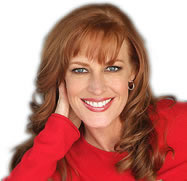 Lorrie Morgan-Ferrero founded Red Hot Copy (www.RedHotCopy.com ) in 1999 in an effort to work anywhere, raise her family, and still make a good living. Her background in journalism and acting prepared her for the competitive nature of copywriting.

Today Lorrie is the top female copywriter in the information market and focused on bringing *The She Factor*Workshop and Marketing System (http://www.redhotcopy.com/shefactor.html) to entrepreneurs and organizations ready to skyrocket their incomes.

Lorrie’s words have sold products in a variety of industries including: nutritional supplements, professional speaking, the seminar business, hypnosis, health & fitness, biz op, and entrepreneurial services. After working closely with household names like motivational speaker Les Brown and Mark Victor Hansen, co-author of “Chicken Soup for the Soul”series, Lorrie now focuses on educating entrepreneurs and copywriters on how to get the job done the RIGHT way.

She has written two award-winning home study courses, teaches world-famous teleseminar trainings, holds live workshops on copywriting for the female market, and heads her own mentorship programs for copywriters and entrepreneurs. Currently she is finishing her book, The She Factor: How to Find, Catch, and Keep Your Share of the Female Market, due out in 2009. Lorrie is a direct descendent of Ralph Waldo Emerson but swears their writing styles are completely different.

Lorrie is dedicated to teaching the world it is possible to shift from the hype-filled sales copy to a more modern version…copy written with authenticity, trust, and rapport.

Would you like to be featured in our Community Ties Nonprofit Newsletter?
Do you have a story to tell that would offer valuable insights to our subscribers?

If you are a nonprofit development professional and would like to be interviewed for our Community Ties Nonprofit Newsletter, or if you have an interesting story that relates to donor recognition, donor walls, donor relations, stewardship, interactive technologies, nonprofit marketing or related nonprofit areas, that you think would be of interest to our readers, please e-mail us at [email protected].

We look forward to hearing from you!