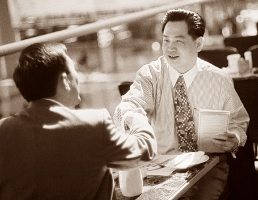 They say that technology, in many respects, has made life easier for most of us. At work, new tech like e-mail and file sharing have become staple methods of communication with clients and colleagues.

But studies are showing that just because we’re able to move more information around, doesn’t mean we’re actually any better at listening to each other.

In the case of donor stewardship, this can be a primary obstacle to achieving fundraising goals for nonprofits and charities alike.

On his website, Bikeontours.on.ca, noted Ontario fundraising consultant Howard Pulverexplains that gooddonor stewardship is all about“developing an ongoing relationship with the donor, which includes thanking and recognizing them for their contribution, ensuring that the gift is used well in the way that the donor wished, reporting to the donor on what has been accomplished with their gift, heightening their interest and involvement with the cause, and soliciting additional larger donations in keeping with the donor's interests. Most importantly, it is centred on the interests and needs of the donor, rather than the needs of the organization.”

A tall order, but one that technology can surely accomplish, right? Maybe.

Though Pulver also advises sending handwritten “thank you” notes to donors to emphasize the personal touch, in today’s fast-paced world, it may be more expedient to personalize as much as possible through technology.

Sharron Batsch, a partner with The Batsch Group in Edmonton, notes that although her organization markets fundraising asset management software/databases for nonprofits, technology is still just a tool being guided by a human being.

“I think that good data management is essential if you want to invest in donor stewardship [but] I think we need to be careful when we discuss technology. Having close to 38 years experience in the computer field, I think it’s a base level of technology that is very important.  At a certain point, the value of the information collected can be degraded and become no more than clutter. Good business methods need to be the focus of all technology use,” she says.

And what constitutes good business method? According to Batsch, it all comes down to old tech, namely, people.

“Charities need to define the expectations they have of their staff members. One person keeps their contacts in their blackberry, another won't use the fundraising software for special events because they have always used spreadsheets; the grant person keeps their stuff on their computer and so on, [resulting in] chaos, poor data management and impaired donor stewardship,” she states. “All the electronic tools in the world will not replace good quality management methods.”

Still, those who create fundraising tracking software are providing an essential service for donor-stewards, according to Pulver. “Good donor records are imperative in order to practice good donor stewardship,” he writes on his website.

So technology does have its upside in relationship-building with existing and potential donors. Charities, nonprofits, and their donor stewards are finding creative ways to leverage new tech for the benefit of donors in the voluntary sector.

Aside from the tried (and sometimes tired) old methods of letter-writing or e-mail campaigning, the Internet has provided a platform for stewards to reach out and engage donors like never before. The ease with which blogs, specially-designed web pages, RSS feeds and the like allow sponsors to check up on their pet charities and philanthropic projects, makes keeping clients in the loop a relatively simple thing.

As far as donor recognition programs go, Winnipeg-based Planned Legacy has developed a way for its donor-steward clients to “wow” their benefactors. It’s all about being interactive. The company uses touch-screen technology to create donor recognition kiosks, walls, signage and other instruments as a way for organizations to reward and recognize donors with on-site, real-time visual pizzazz. Their technology has been picked up by universities, hospitals and numerous foundations across the country.

Marshall Posner, president of Planned Legacy, says the secret to his company’s success is in the correct implementation of their technology that helps their clients attract and keep donors.

“Staying current with your donor constituents is paramount to providing effective stewardship,” he says. “Technology can facilitate a greater level of communication and it also affords an organization more opportunities to communicate with donors. At one time, telephone conversations and personal letters were the most effective methods of communication. Now the web and other interactive displays allow donors to find what they’re looking for instantly. Donors have greater access to all kinds of information on the web and through multimedia displays. This leads to better informed donors and also provides greater transparency and accountability, which donors now demand.”

What’s more, says Posner, the impact of introducing new technologies to donors can be more effective when a smart, focused, technology-intensive campaign is drawn up.

“The Internet and interactive multimedia presentations that are part of [our] displays act to attract, inform, persuade, and generate greater participation from donors,” Posner says, adding that they form part of a greater set of “essential tools for nonprofit organizations that are looking for additional methods of creating greater awareness, communicating effectively with donors and in general providing a higher level of donor stewardship.” The results he’s seen have been tremendous and are just going to increase, he says.

“Technology as a communications, recognition and marketing tool for nonprofit organizations is here to stay,” Mock says. “The technology landscape has changed dramatically...to the extent that many of the installations we develop today include opportunities for visitors to make credit and debit card contributions right at the display.” Another plus, according to Mock, is that staffers at a nonprofit can now make content changes to their displays from any computer connected to the Internet.

That’s the marketing side of things. But how do the professional fundraisers view the topic?

We’re down with AFP, yeah you know me

Michael Nilsen, director of public affairs for the Association of Fundraising Professionals (AFP) - boasting 29,000 members in 196 chapters around the world - tells CharityVillage that donor stewardship is “at the core of ethical fundraising.” But beyond being accountable to clients and members for the dues they pay (an essential philosophy with AFP and any self-respecting fundraising professional), technology is a high-priority topic for Nilsen and his ilk.

“Trying to catch up with technology is something of a double-edged sword for most charities,” he says. “On one hand, yes, it’s something of a cliché, but technology is the way of the future, and donors are expecting that, especially younger generations. In the past, charities have often had to play catch up when it comes to technology, and unfortunately in many cases that’s still true. But when donors are expecting a certain amount of technology know-how - for example, donor segmentation and using personalized information in a letter or other communication - and charities can’t provide that, then that looks bad from a donor perception point of view. Charities need to be able to use technology to show that they are ‘relevant’ and up-to-date with current thinking.”

That said, Nilsen points out that AFP has noticed two major evolutionary changes in technology and its effect on donor stewardship over the years.

But Nilsen warns that both of these changes in technology create a sense of expectation with donors. “Once a donor interacts with a charity like this, they will not want to go back, so they will come to expect certain things from charities with regards to speed, personalization, impact, etc.,” he adds.

It all comes back to the end user

Echoing Batsch’s comments above, Nilsen acknowledges that while technology has definitely helped the job of donor stewards, especially with the rise of robust database programs, it’s only as effective as the person implementing it.

“Technology is helping hundreds of thousands of charities reach out and effectively steward more donors than ever before. Many campaigns right now simply couldn’t occur without the use of technology. A comprehensive database program is probably the most essential. Without good records about donors and prospects, all the technology in the world isn’t going to help,” Nilsen states.

“It should also be said...that technology is simply a tool and a medium, it is not the message. Charities that haven’t done a strategic plan or developed a case for support or defined their goals aren’t going to enjoy any of the successes that technology brings. Nor will it ensure that an organization is accountable and transparent. These are priorities that remain very much on the fundraiser and other charity staff.”

To that end, Nilsen reminds us that donor stewardship, while about methods, processes and technology, is at its heart, a human affair.

“The donor-organization relationship does not end with a charitable gift; in fact, it just begins at that point,” he says. “Stewardship concerns informing the donor about how their funds were used and how their gift has made an impact [and] also involves communicating with donors about how they can continue to help in the most effective and efficient ways possible.”

To borrow an old slogan, the best way to do that, most experts will agree, is to “reach out and touch someone.”